When reporters talk about volatility, recessions, depressions, bubbles, and other fear-inducing financial news and opinions, clients often pull their money from the portfolio that they carefully selected in an urge to protect their assets. However, investors who stick to their long-term plan and rational investments tend to outperform investors who trade reactively.

Part of the problem is that when investors pull out of the market, they tend to pull out for some time. This has been a very poor decision in the past. For instance, investors who switched to cash during 2008 generally missed the 2009 rebound. Since that financial crisis, volatility has normalized somewhat. The chart below lists the volatility spikes since then and the subsequent returns of the S&P500. It also shows the average return that an investor would have lost if they pulled out at the spike and waited a few days or months to reinvest. These range from an average 0.6% loss from pulling out for five days after a large spike to an enormous average 52.5% loss from pulling out for three months after a 25% spike. Though there is no guarantee that this pattern will always manifest, this analysis shows that on average investors gain, rather than lose, by staying invested. 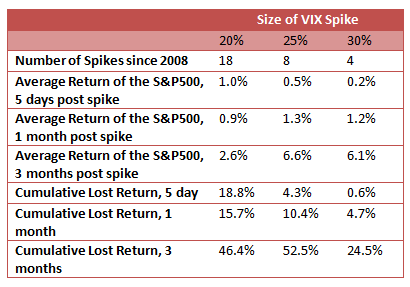 Though the chart only contains the spikes post the financial crisis, we analyzed back through 1990 and found similar results. (The one week returns tended to be a little higher and the three month return a little weaker, but the same pattern of recovery emerged.) The bottom line is that pulling out of the market when volatility spiked or when the markets cause nervousness resulted in missing some good returns. This may at least make investors reluctant to scrap their investment plans based on nervousness.

Investors can trust us to make sensible, well-thought out decisions. All of our global strategic asset allocation portfolios are well positioned for spikes because of our global diversification through Michaud optimization, which considers thousands of possible futures. Historically, our portfolios have weathered far greater volatility than these recent spikes. So far, these spikes are consistent with normal market corrections; they do not point to a period of free fall for US equities. In fact, U.S. equities performed admirably in the last year, and many economic indicators remain positive for the U.S.   Nonetheless, our daily portfolio monitoring is done with sharpened eyes given the volatility at home and, more importantly, abroad.