At New Frontier, research, technology, and investments are all closely linked.

Our consistent innovation comes from our Investment Committee encountering open issues in modern finance, which are then analyzed by our Research Committee. The solutions developed by the Research Committee are then incorporated into our technology, which in turn is used by our Investment Committee. This open feedback loop allows us to approach practitioner problems with academic rigor. Our second signature technology, the patented Michaud-Esch Rebalancing method, and the consequent benefits to our portfolios, is one example of the success of our process. We continue to publish our research in peer-reviewed refereed journals of the highest repute, which encourages a transparent process. 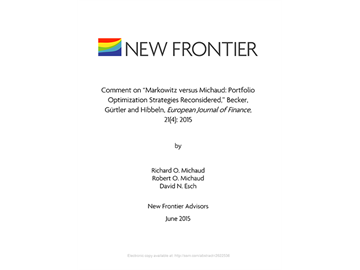 "We are pleased that Becker, Gürtler and Hibbeln (BGH), authors of “Markowitz versus Michaud: Portfolio Optimization Strategies Reconsidered,” are interested in assessing the investment value of Michaud optimization (Michaud 1990, Michaud and Michaud 2008), relative to Markowitz (1952, 1959)…However, unlike Markowitz and Usmen (2003), who carefully followed the simulation framework first used in Jobson and Korkie (1981), and subsequently in Michaud (1998, Ch. 6), and Michaud and Michaud (2008, Ch. 6), BGH used a very different approach. In several important ways, we find that their framework is unsuitable for the issue they claim to test and their conclusions invalid as a consequence." Read more. 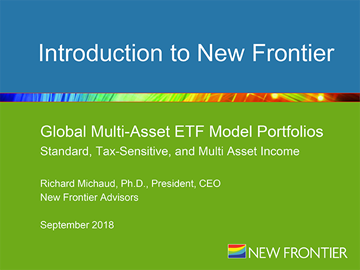 This presentation by New Frontier President and CEO Dr. Richard Michaud provides an overview of our investment philosophy and process.