Investing in Value and Growth: A Brief Overview

Much academic and industry effort has been placed into how to meaningfully divide the equity markets in the US and other countries into parts which behave distinctly, cross-sectionally and over time. Fama and French (1998) were pioneers into dividing US equity markets by ranking on fundamental characteristics, finding important differences in high versus low-ranked stocks along scores they termed “value.” Many funds launched thereafter were based on this research, and the two terms “growth” and “value” are now heard in every day practice. In the industry it is common to think of equities as existing on a value to growth continuum, but academic definitions of value and growth are usually independent of one another. Academics may disagree on precise definitions of value or growth, but in industry there are even wider differences within value and growth categories — every investment product seems to have its own rules to sort and rate equities on growth or value.

In spite of multiple definitions of growth and value, there are a few general truths about their performance over time. Each can perform well (or poorly) but they tend to do so at different times. It is quite difficult to forecast these cycles, because markets rather efficiently assimilate information into their prices.

Academic definitions of value usually center on ratios of fundamental quantities to price, i.e. book to market equity (B/M), earnings to price (E/P), cash flow to price (C/P), and many others. High ratios are thought to signify that the security’s price is low compared to some other intrinsic valuation, and such a security has relatively greater embedded value. Scholarly definitions of growth are less clear and may be independent of value. They generally select securities that generate sustained cash flow and whose revenues and earnings are expected to increase over time. Growth may be offered as an explanation of why securities that score low on value metrics might still perform well. However, growth characteristics can also manifest in equities that have high value scores, so growth really should be thought of as an independent characteristic from value, rather than simply its opposite. However, in the finance industry, growth is often defined inversely to value so that the growth and value funds complement each other, comprising the entire equity market together so that equal exposures to both will result in full market coverage.

During the last 10 years, growth has dominated value in performance until 2022, with the greatest outperformance in 2020. This extended underperformance of value is unusual in history. From 1936 to 2021, the rolling 10-year return of value defined by Fama-French factor model has mostly outperformed before 2010 (e.g., periods of value dominance include blue-chip stocks rally in early 1970, the aftermath of dot-com bubble during 2000-2001, and rebound of financials in 2009). These historical periods of growth and value performance are shown in the two panels of Figure 1. We note here that alternative value/growth formulations by academics and practitioners could lead to different conclusions.

Figure 1: Cumulative Performance of Fama-French Growth and Value, as defined by first and fifth quintiles of Book/Market Equity, since 1926 and 2010. During most of the last century, value has dominated up to 2010, but since then, growth has mostly dominated until 2022. Data is from Kenneth French’s website: Kenneth R. French - Data Library (dartmouth.edu). Growth and value here are interpreted as the low and high quintiles of the market, segmented along B/M (Book value to Market Equity). 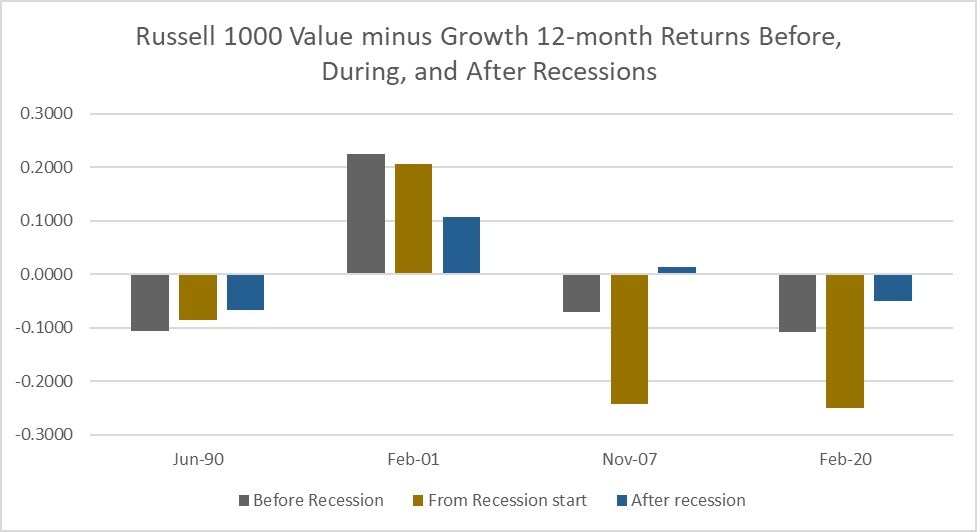 Figure 2: For four different recent recessions, the outperformance of Russell 1000 value over growth funds before, during, and after the recessions. Recessions are defined as per the National Bureau of Economic Research (NBER) Business Cycle Dating Committee (BCDC), as “a significant decline in economic activity that is spread across the economy and that lasts more than a few months.” Recessions are considered as extending from peak to trough, so in this graphic, “before” signifies the 12-month period before the peak, “during” measures the 12-month period after the peak, and “after” measures the 12-month period after the trough. Returns are calculated from the Russell 1000 Value and Growth Indices.

At New Frontier, we view value versus growth as a meaningful segmentation of the market for risk management, and differently risk-tolerant investors may rationally prefer different mixes of the two styles. To this end, value and growth ETF exposures are optimized separately along the efficient frontier. Instead of having the same value/growth tilt for portfolios with different risk targets, aggressive portfolios with higher risk tolerance can have proportionately more growth stocks since growth is the more volatile style. Conservative and balanced portfolios, on the other hand, can have proper value tilts to enhance diversification benefits.

The question of which will outperform in any given period is less relevant in a strategic investing framework. Rigorous optimization and rebalancing of value/growth mixtures provides risk management and assists in preserving capital. Long-term institutional investment management has proven the benefits of a risk-controlled approach: effective diversification is the best shield against realistic uncertainty about the future and maximizes prospects for long-term wealth. The best risk-optimized strategic portfolios will have a roughly consistent exposure to growth and value over time, suited to the investor’s risk preferences and tolerances.

Disclosures:
New Frontier Advisors LLC (“New Frontier”) is a federally registered investment adviser based in Boston, MA. The information discussed here is for information purposes only. Past performance does not guarantee future results. As market conditions fluctuate, the investment return and principal value of any investment will change. Diversification may not protect against market risk. There are risks involved with investing, including possible loss of principal. Before investing in any investment portfolio, the investor and Financial Advisor should carefully consider the investor’s investment objectives, time horizon, risk tolerance, and fees.