Markowitz mean-variance optimization provides the classical definition of portfolio optimality. Markowitz efficient portfolios have maximum return for a given level of risk or, equivalently, minimum risk for a given level of return assuming perfect knowledge of risk and return distributions. However, Markowitz optimization has important limitations in practice. Without numerous constraints, the procedure is typically unstable and often leads to unintuitive and unmarketable portfolios. Moreover, since input assumptions are usually wrong, mean-variance portfolios are optimized to something other than the truth and can be improved upon by assuming a plausible region around estimates to contain the truth, rather than assuming that mean-variance inputs are identical to the truth.

Markowitz efficiency, while theoretically sound given its assumptions, is limited in practice by how information is used in modern computers. Markowitz optimization is built on the assumption that risk-return inputs are accurate to 16 decimal places. While such precision is essential for many scientific and engineering applications, it is absurd for finance. The mismatch between optimization precision and level of investment information certainty results in portfolios that have limited, if any, investment value. 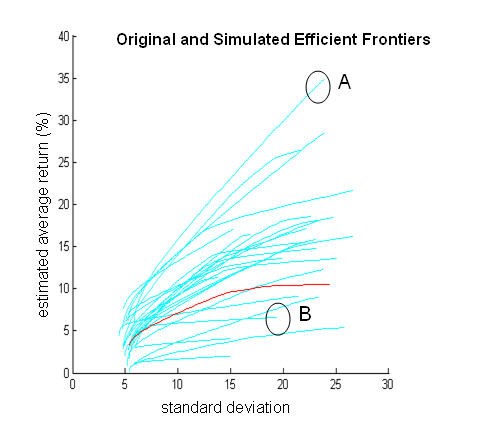 A similar figure appears in Efficient Asset Management by Richard Michaud and Robert Michaud, published in 2008 by Oxford University Press.  This version of the figure is for illustrative purposes only.