Markets are pricing in a potential recession as central banks slow economies to fight inflation. While it is rare to have a recession without investors experiencing some pain, this self-imposed economic slow-down is highly anticipated and may be briefer than most; despite the bear market indicating a potential recession, current employment remains high and supply chains are improving. The question remains whether the planned rate hikes will be sufficient to slow inflation.

This quarter continues the theme of Q1 with markets rapidly incorporating new inflation data and shifts in Fed policy. While inflation remains the top issue for households and investments, attention is shifting towards lower economic growth, which has fueled more uncertainty for equity markets.

Recession concerns were harsh on global markets. Global equity markets went down 15%, following a 5% decline in Q1. The S&P 500 fell into an official bear market on June 13 and regained 1% since then, closing the quarter with a loss of 16%.

Bond markets remained under pressure as central banks raised interest rates, extending their first quarter drawdown, by 4.7%. The 10-year US Treasury yield had a volatile quarter ending at 3% after reaching 3.5% in mid-June. It’s unusual for both asset classes to meaningfully decline two quarters in a row (historically only seen in 1981 and 2008), but it’s not surprising in the context of markets driven by inflation and recession concerns.

Equities hurt absolute performance, but fixed income exposure weighed on relative performance overall. Long-duration bonds remained the main detractors this quarter, sensitive to higher rates as well as inflation expectations. Exposure to duration was trimmed during the recent rebalancing by incorporating higher risk estimates for long-duration bonds. Corporate bonds underperformed US Treasurys with wider credit spreads, whereas municipal bonds declined less than their taxable counterparts. Meanwhile, a rally of 7% in the US dollar further pushed down the returns of international Treasuries and Emerging Market bonds in dollar terms.

On the equity side, value continued to outperform growth by 8% and value tilts across most portfolios contributed to the relative performance. US Min Vol and EAFE Min Vol served the role in the portfolio as low volatility equities and were among the top contributors in Q2, adding stability to the conservative and balanced portfolios. Emerging markets held up better than developed markets, driven by positive equity returns from China.

New Frontier uses the Michaud-Esch portfolio rebalance test to guide portfolio reallocation and rebalancing decisions. This framework allows us to simultaneously consider changes to the risk characteristics of portfolios from price movements, and changes to optimal portfolio exposures from new capital market expectations.

This quarter, we determined all non-taxable models would likely benefit from rebalancing. While last quarter saw notable changes in the market environment affecting the optimal portfolio, the rebalance test was not triggered as asset prices moved down across the board (i.e., both bonds and equities declined roughly by 5%) leaving the risk exposures of portfolios largely unchanged. This quarter, however, both components which affect reallocation decisions – new market information, and disperse price movement among asset classes — contributed to our patented rebalance test and indicated a need to trade.

The dominant economic news is encapsulated in the Fed’s battle with inflation and the collateral damage to the economy. Inflation is undeniable with annual CPI and core inflation rising by 9.1% and 5.9% as of June. The magnitude of inflation caused the Fed to effectively abandon its dual mandate of high employment and low and stable inflation to focus solely on inflation.

The Fed may be right to risk recession to fight inflation. So long as the Fed maintains credibility in its ability to control inflation, high inflation expectations may not become ingrained. Since much of inflation is beyond the control of the Fed, signaling anything less than a willingness to do whatever it takes could be seen as ineffective and risk an inflationary spiral. The aggressive 2% target supports this position. In the classic signaling problem it matters more that people believe you will do what you say than that you actually do it. Similar to cold war games, it can pay to be excessive since the more everyone believes you’ll do anything, the less you have to do. The positive implication is that the more it seems that the Fed is willing to cause a recession, the less likely it will have to do so.

Fortunately, there are signs of inflation moderating without serious intervention. Energy prices have fallen from their peaks mid quarter and raw materials are lower as well. Higher inventory at stores and anecdotes of half-empty restaurants further indicates prices may have peaked and consumer demand is insatiable no longer. Even lingering price pressure from pandemic stimulus has been offset by cheaper imports from the stronger dollar. But the bigger picture for inflation remains—inflation is a global issue. The impact of supply chains and Russia dwarf the policies of the past two presidents, and the still-robust labor market indicates continued investment and growth expectations which may need to be cooled by the Fed. 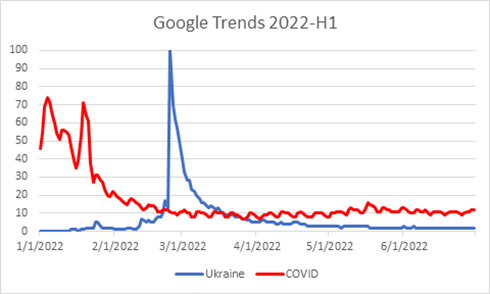 As we look ahead, the question is what will happen to fixed income and equity markets in light of the Fed’s plan to bring us to the brink of recession. In the long term, investors will benefit from the robust economy supported by thoughtful fiscal policy choices. In the shorter term, there’s a case to be made that fixed income markets have fully priced in both expected rate hikes and inflation. This brings us back to the question of recession. Current economic forecasts and market valuations roughly expect an economic slowdown — somewhere in the grey area around a shallow recession. Whether investors will benefit depends on whether the market is under- or over-estimating the future, in particular, whether inflation subsides without excessive intervention.

We do not forecast the real estate market, but home prices have appreciated for many investors and the housing market affects the broader economy. We apply the institutional investment framework when building core portfolios for households, which means building portfolios to provide risk-optimized return across a range of market scenarios. Home prices make up a larger portion of many households’ wealth but housing prices are more volatile than normal. This means the overall volatility of household wealth has risen substantially which should be considered when investing in a core portfolio.

Looking further ahead, deglobalization is a continuing theme in economies around the world. Potential shortages of critical food and energy resources have enhanced already high concerns around global supply chains for ordinary economic production. Over time, this will incentivize individual economies to be more self-reliant and insulated from other markets. Economic deglobalization and decoupling have the potential to make international markets less correlated and international diversification more valuable to a portfolio.

This quarter’s commentary is, as is often the case, a story of opposing forces. In this instance, the aggressive stance taken by the Fed in its quest to lower inflation is at a crossroads with investor expectations of an impending recession, with both contributing to market uncertainty. While our focus on the Fed is largely because its plans for rate increases and bond tapering have been laid out, unexpected events may still have a significant impact on markets. While future phases of the COVID-19 pandemic, the Russian invasion, US political infighting and Chinese regulations will almost certainly affect markets throughout the rest of 2022, their impacts are unpredictable and whatever information we have is already priced in. If there is a lesson for the quarter, it is that after 10+ years of consistent economic growth, the current market reminds us that the best diversified portfolio is one that accounts for the inherent uncertainty in investing.

We’re excited to announce Richard Michaud’s recent research on expected utility and the implications of social science on financial theory is under contract for publication by Palgrave Macmillan.

DISCLOSURES: Past performance does not guarantee future results. As market conditions fluctuate, the investment return and principal value of any investment will change. Diversification may not protect against market risk. There are risks involved with investing, including possible loss of principal.