2020 was good for investors. The S&P 500 returned 18% despite the enormous economic shock caused by COVID-19. Growth and tech stocks performed very well this year, with the NASDAQ returning 45%. Value, small cap, and international stocks lagged behind for most of 2020, but they rebounded strongly in the fourth quarter following the results of the presidential election and terrific vaccine news. The arrival of the Pfizer-BioNTech and Moderna vaccines marked a turning point in the pandemic.

Despite extensive economic and human costs, 2020 may be a turning point in multiple ways. The speed of the U.S. economic recovery indicates that the U.S. economy is far more resilient than previously acknowledged. The rapid development of a coronavirus vaccine showcased the astonishing capabilities of modern biotechnology firms financed by governments and capital markets. In addition, this year’s innovations in fiscal and monetary policy might become a new standard. Much hinges on whether the Biden administration can implement its agenda of accommodative fiscal policy and strict climate change regulations.

All of New Frontier’s core global and U.S.-based ETF strategies, as calculated by S&P Dow Jones Indices, performed very well this year relative to their benchmarks. 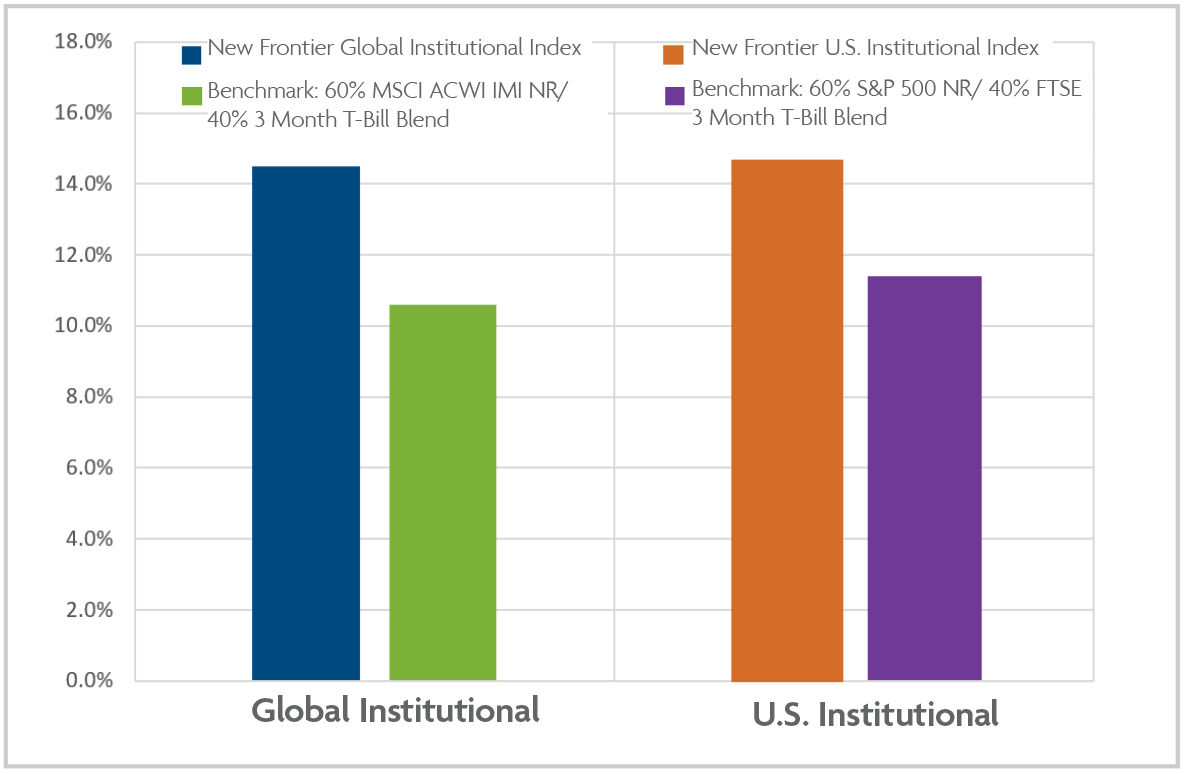 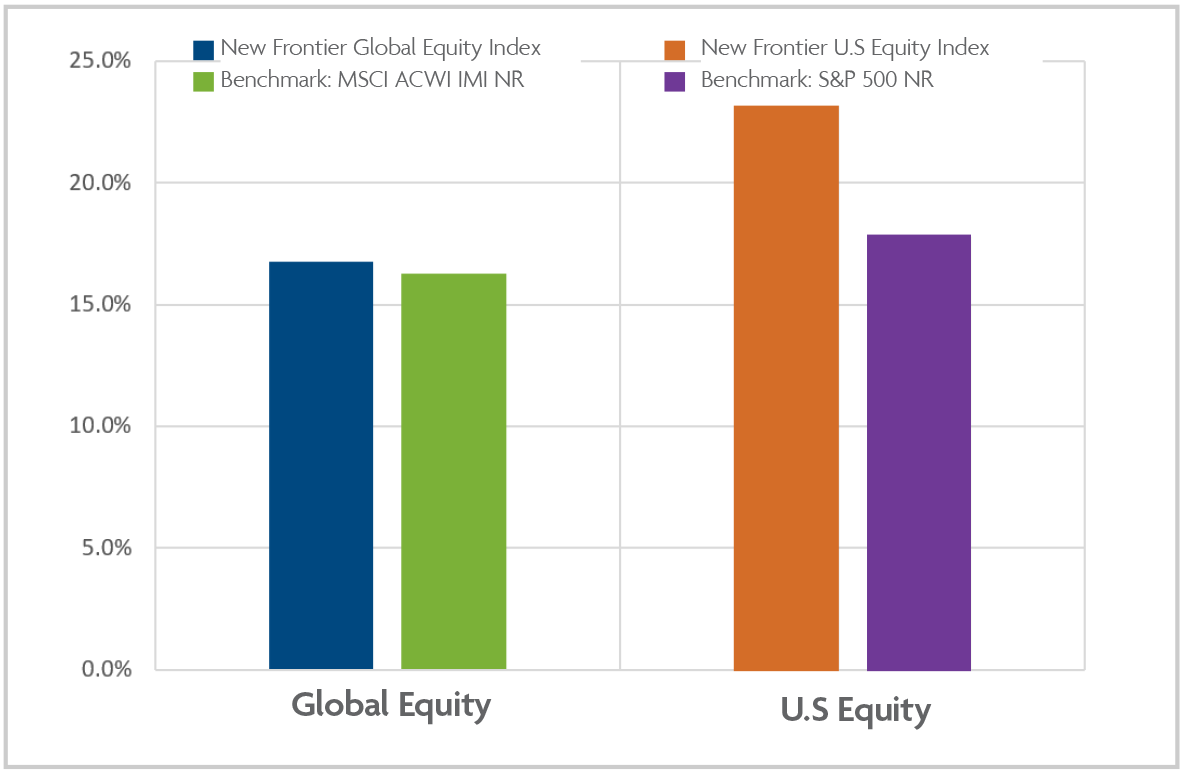 While Treasurys and gold returned 8% and 25% respectively in 2020, they were flat in Q4. 10-year Treasury yields rose in the fourth quarter but could not break the 1% mark—a level unthinkably low before March. Credit spreads continued to tighten, finishing the year near 2019 levels. The U.S. dollar also extended its decline, closing the year down 7%.[3]

The development of effective COVID-19 vaccines in under a year was a historic scientific triumph. Biotechnology companies, financed by markets and governments, delivered a vaccine in record time. The U.S. government spent approximately $12 billion to help develop a vaccine.[5] Compared with the trillions it spent supporting the economy, vaccine development was a terrific investment that will likely alter the course of the pandemic by mid-spring 2021. Nevertheless, distribution poses considerable logistical challenges, and new strains of COVID-19 could complicate containing the virus.

Despite the great news about vaccines, COVID-19 infections reached new highs in December. Globally, hundreds of thousands may die before enough people are vaccinated, and the pandemic will likely continue through 2022 in several developing countries. In 2020 over 1.7 million died of the virus worldwide—including over 346,000 Americans, an annual death toll unrivaled since the Spanish flu.[6] Many of these deaths were avoidable. Governments could have controlled the virus more effectively, as shown by China, New Zealand, and others.

The speed of the U.S. recovery was remarkable. In June the Fed predicted that GDP would contract by 7% this year and unemployment would stand at 9% in December. In fact, unemployment fell to 7% by October, and GDP contracted by only 2% in 2020. The recovery is especially impressive given COVID-19 continued surging and Congress did not pass another stimulus until December. Similar upward revisions to 2020 GDP forecasts occurred for the Eurozone and elsewhere.[7]

The $900 billion bipartisan stimulus package was timely given the recovery has slowed. Retail spending fell by 1% in November, and new jobless claims remain above Great Recession levels. The stimulus extended unemployment benefits, provided $285 billion for small business loans, and sent stimulus checks to most families. The package provides targeted relief, although this does not include urgently-needed aid for state and local governments. Nonetheless, the stimulus should help counter the economic headwinds caused by this winter’s high COVID-19 caseloads. The recovery will likely gain speed once vaccines are widely distributed.

Never before have central banks gone to such lengths to avert economic collapse. The Fed and European Central Bank (ECB) balance sheets swelled by trillions. In a major policy change, the Fed announced it will no longer prioritize low inflation over full employment. In December, the Fed and ECB reaffirmed their commitment to aggressive bond-buying programs. Emerging market central banks have also kept rates low and implemented bond-buying programs which would have alarmed foreign investors in the past. But we now live in an ultra-low rate world.

The changes in fiscal policy were arguably more dramatic. In 2020 the U.S. federal budget deficit soared to a record $3 trillion to fund the $2.2 trillion CARES Act and other stimulus programs. Governments around the world also ran large deficits to fund similar programs. In addition, governments and central banks cooperated closely in 2020, raising concerns about central bank independence.

These major policy changes may indicate a systemic shift in the balance of power between markets and the state. More so than they have in decades, markets in 2020 moved in response to announcements from central banks and governments. Valuations are underwritten by the Fed’s commitment to maintain low rates for years. The U.S. economy, nevertheless, remains clearly capitalist. The government has focused on supporting the economy, not subverting or nationalizing private companies.

Despite the presidential election being priced as a high volatility event, the VIX fell to 25 by the end of election week. This was somewhat surprising given no winner had been declared. The results were closer than polls had indicated, although prediction markets more effectively captured the uncertainty of the outcome. Election-related volatility was negligible for the rest of the year, though the results remained hotly disputed by some. Investors seemed content believing a Biden administration, Republican Senate, and legislative gridlock were likely.

The fate of Biden’s agenda, which focuses on the economy and climate change, depends on the Georgia Senate runoffs on January 5. Unless the Democrats win both races, the Biden administration may be met with congressional deadlock. On the other hand, the outcome certifying the Biden victory seems certain, since both the Senate and the House would have to reject the electoral vote tally. U.S. politics will likely remain polarized, although December’s bipartisan stimulus indicates the possibility of bipartisan cooperation. In the long-run, the economy might be limited by partisanship and strained political institutions.

European Union (EU) nations demonstrated in 2020 that they may be able to work together pragmatically. The €750 billion Next Generation EU recovery fund, financed by debt issued by the European Commission, will provide relief over 2021-2023. EU vaccine distribution will also be coordinated by EU institutions. Further European cooperation and centralization are possible in the coming years. European leaders will no longer be distracted by Brexit after reaching a post-Brexit trade deal on Christmas Eve.

China’s economic and geopolitical strength was made clear in 2020. China defeated COVID-19 by April, and its economy grew by 2% in 2020, while other G20 economies contracted. According to the OECD, China’s economy will likely continue growing at the fastest rate in the G20 in 2021.

Throughout 2020, U.S.-China tensions simmered. Beijing shrugged off U.S. attempts to constrain Chinese state-associated companies such as Huawei and ByteDance. Similarly, the West could do little as China tightened its grip on Hong Kong; consequently, Hong Kong and mainland China markets may converge over time. After the U.S. election, China completed a trade deal with fourteen other Asian countries and also signed an investment pact with the EU. China might be maneuvering to counter Biden’s attempt at building a multilateral coalition against China.[8]

In response to a U.S. executive order restricting investment in Chinese military companies, MSCI removed several relatively small Chinese companies from its equity indices on January 5.[9] The immediate implications are limited, but this highlights the possibility of further investment restrictions being imposed in the future. Beijing seems unconcerned and, in a shift in economic policy, more interested in reigning in powerful private companies like Alibaba.

Initial public offerings (IPOs), including so-called blank check IPOs, raised record amounts of equity in 2020. After years of startups being content with private capital, public markets may be back in favor. In addition, retail investors played a larger-than-usual role in the market rebound; they piled into tech stocks and call options. This raises the question of whether more Americans will participate in capital markets, and if so, whether they will make speculative bets or instead enlist professional asset managers.

Major issues for investors in 2021 include the Biden administration’s policies (especially regarding China, the trade war, fiscal policy, and the environment); a globally uneven recovery; a possible uptick in inflation; the impact of COVID-19 vaccination campaigns; antitrust cases against big tech firms; and post-pandemic work and travel habits.

Certain high-impact events like COVID-19 are both exogenous and unforecastable. Investors should be aware of the power of such unpredictable events when deciding how much risk to tolerate. These events can also create considerable dispersion among asset classes, as observed with growth and value stocks. This highlights the importance of maintaining portfolio optimality. Notably, poorly optimized value investment strategies severely underperformed the overall market in 2020.

2020 also illustrated the importance of long-term portfolio efficiency during times of high volatility. Investors who cashed out in March—or decided not to invest in equities in the spring or summer—missed out on much of the rebound. Similarly, investors who bet against the market, or shorted stocks that appeared overvalued, lost a lot of money. Successful long-term investing requires resisting the temptation to be overly influenced by short-term issues and events.

[1]Our T-Bill bond benchmark is the FTSE 3 Month U.S. T-Bill Index. The blended benchmark assumes the portfolio is rebalanced monthly.

[2]These comparisons are based upon the S&P 500, the S&P 500 Value and Growth indices, the Russell 2000 Index, and the Dow Jones Global Dividends Index. All comparisons use total returns rather than price returns.

[3]These numbers are based upon the Bloomberg Barclays U.S. Treasury Index and the ICE US Dollar Index.

[4]Comparisons are based upon the S&P 500, the ACWI ex-US Index, the MSCI China Index, and MSCI Emerging Markets ex-China Index.

John McCrary is a member of the New Frontier Investment Committee and provides support and insights to both the Investment and Research teams. He joined New Frontier as a Research Analyst after graduating from Northeastern University with an M.A. in Economics. His interests include asset allocation, quantitative analysis, portfolio construction, and applied econometrics.